The History of The Walled Garden 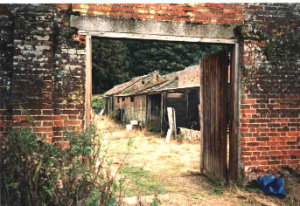 The Walled Garden was built in the first or second decade of the 1800s to grow fruit and vegetables for Benhall Lodge and the owner’s London home.

It stands about 300 yards to the south-east of the nursery on the other side of a wood. Apart from the wall and other buildings which remain, there were a number of glasshouses, the last of which was destroyed by the hurricane of 1987.

A large lean-to vinery house, with a ventilation system similar to that used in sash windows, stood on the south of the wall which divides the garden. Grapes were grown on wires fixed to the glazing bars, while peaches were grown on the back wall. On the south facing wall of the garden and in other parts, remnants of whitewash can be seen where other glasshouses stood. Much of this was heated. The chimney of the boiler house stands behind the south facing wall. There were three boilers in total, all serving heating systems with heavy 4” cast iron pipes. The boilers were all sunk below ground level to allow the hot water to circulate through the pipes by convection. In the autumn, the car park was filled with heaps of coal brought from Saxmundham railway station by horse and cart. Clay flower pots, packed in straw, also arrived via the railway. The many holes that you can see in the wall were made by the nails which held the carefully trained fruit trees against the walls.

Following the First World War the purpose of the nursery changed from supplying the needs of the Estate to that of a thriving and independent commercial concern. Soft fruit, including peaches,figs and grapes were supplied to a considerable local area; bedding plants were regularly delivered to outlets including Woolworths in Great Yarmouth and cut flowers assumed an increasing importance.

During the three decades after the second world war, Jimmy Frazer leased the nursery from Benhall Estate. He grew lettuce and chrysanthemums. Many of the local people during those years were involved on disbudding chrysanthemums, that is taking the buds out of the side shoots so that there was one large terminal flower. Most that are sold today are spray chrysanths; many flowers to a main stem. The produce was sold locally and at Covent Garden market.

When Jimmy retired, there was a gradual decline in the fortunes of the nursery and the disrepair of the 1980’s became dereliction by the time we took over in 1987. We set to work to make a nursery in that year, first digging trenches for water pipes and electricity and soon after building polythene tunnels. Within weeks of starting work, the hurricane which caused enormous damage in Suffolk also took out a section of the wall by the main entrance gate. After cleaning up bricks for the repair for several weeks, we decided to fill part of the breach with a wooden greenhouse. This we constructed from old pitch pine glasshouse timber from the Lee Valley where many such structures were being taken down. Like most of the work on the nursery, we did all the work ourselves.The wall is made of about 300,000 red bricks. These had been fired on site from clay dug from a pit adjacent to our car park.

Since then, every year we had a project of improvement and having purchased the site in 1992, we were able to make a leap forward: building more glasshouses; repairing the entire wall; creating the garden; building our house; and finally replacing our original polytunnels with 850 square metres of modern glass with computer controlled ventilation and thermal screens to shield people from the sun’s heat in the summer and to act as additional insulation on cold nights.

Today the Walled Garden prides itself on specialising in growing quality perennials which will make any garden a pleasure and showing off the catalogue of these in the now flourishing garden.

About The Walled Garden